February 04, 2020
I've been having issues with my HRM-Tri recently where it just doesn't seem to give me results consistent with my relative perceived effort.  For example, starting out fresh on a treadmill at about 10 min/mile pace and the HRM-Tri shows my heart rate around 140 bpm.  I've been so annoyed recently with this perceived inaccuracy that I actually stopped my warmup to manually take my heart rate.  I completely stopped and took my pulse for 15 seconds and came up with a heart rate closer to 100 bpm.  All the while, my watch was showing right around 140 bpm from the HRM-Tri.  It didn't even slow down despite the fact that I was completely stopped, which is completely different from the issue that I have occasionally with the Scosche Rhythm+, which will lock on to my cadence if I'm not adequately warmed up and it's cold outside.

I want the HRM-Tri to work because there are some metrics that are only unlocked if you have a heart rate strap, as opposed to an optical HRM.  The strap can detect heart rate variability which is used to estimate Lactate Threshold.  Optical HRMs aren't able to discern that with any reliability.

To that end, I've started wearing two heart rate monitors, the HRM-Tri recording on the Wahoo Fitness app on my phone, and the Scosche Rhythm+ recording on my Garmin 945.  I've taken to comparing the files to see how bad the HRM-Tri is.

Below is a "workout" from the treadmill this morning.  At some point during the run, I decided I would throw in some 2-minute intervals, changing my speed from 8 mph to 10 mph and then give myself six minutes of recovery.

I was running steady-state at 8mph (as reported by the treadmill - actual pace per Stryd was slightly slower).  I hit the quick-speed button for 10 mph, and at the end of the two minutes, hit the 8mph button to bring it back down (my treadmill takes about 45 seconds to get from 8 to 10 mph and another 45 seconds to go from 10 to 8 mph, so the black lines are when I hit the buttons).

The purple is the HRM-Tri, and the blue is the Rhythm+.  I had been running at 8mph for six minutes prior to this interval.  The Rhythm+ shows a relatively steady heart rate, but the HRM-Tri starts increasing before I even start the interval.  There is no reason that my heart rate should be increasing in the first third of that chart - it should be decreasing or steady-state.  Apparently, my HRM-Tri heart rate strap is psychic.  Or possessed by ghosts.  Or possibly a complicated random-number-generator.  It maxes out during that interval at 164 bpm, but then quickly declines once my treadmill reaches 10 mph in the middle of the interval.  It's like it didn't even notice I was doing an interval, it was just randomly increasing, and by chance, it captured part of my increased effort during the interval.

The Rhythm+ accurately shows my heart rate going up consistently during the interval, and then staying up for a while after (keep in mind, it takes 45 seconds before I am back down to 8 mph), but the HRM-Tri seems to ignore my actual effort.

And before you ask the question, the data are not misaligned.  I started the activity at the same time on my watch and phone.  But further, the DC Analyzer tool automatically aligns the data, and it's clear from the rest of the graph that the data are aligned, but that the HRM-Tri is just giving bunk data.

This is just one example.  I've got a bunch more:
Full workout from above
HRM-Tri Vs Rhythm+
Outdoors

And those are just the ones where I've purposefully worn two monitors - there are too many to count where I've just made a mental note about the HR being way off.

All of this I tried on the new unit they sent me, thinking the initial one I had was bad after going through all of the steps Garmin Support had for me.

I literally don't know what else I can do.  Just as a point of reference, I tried an old Polar H7 HRM strap I had sitting around.  I put a new battery in it and took it for a spin and it was literally unusable.

The HRM-Tri looks pretty good there, but it wasn't.  I did actually have my Rhythm+ on this run, which I recorded with my 920XT, but apparently my 920XT is now dead.  It randomly deletes files on it, and I get I/O errors when connecting it to my PC.

I'm going to continue wearing multiple heart rate monitors because this is ridiculous.  One of these days, I'm going to have my wife, who is a cardiac nurse, assess me while doing a workout to see if there's something wrong with my heart.  I mean, I can't understand why heart rate straps, which are supposed to be super reliable literally can't get a read on me.

If anybody out there has any suggestions, I'm open to them.

December 31, 2019
I'm working from home today.  My "office" is a corner of the basement directly under the kitchen.  The ceiling isn't exactly soundproofed, so I can make out most of the conversation happening upstairs, and I just keep hearing my daughter asking the Google Home what noise various things make.  She especially likes hearing what noise a T-Rex makes, but gets really upset when she asks about the sound a mermaid makes.

She has gotten pretty good about enunciating the "Google", and my son has started apeing her.  He understands that if you say the magic word that you can get the Google Home to do your bidding, and let me tell you, that kid has a lot of things he wants done for him.  The only thing between him and world domination is that the Google Home doesn't quite recognize "googoo" as a hot word yet.  At least not consistently (he has triggered it a couple of times).

He is doing this much earlier in his life than my daughter was.  Of course, sin…
Read more 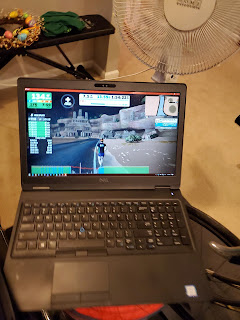 At the beginning of April I got an email from Zwift announcing this season's Watopia Run Festival by Maurten.  They did this earlier in the year with races ranging from 1 mile to 13.1 miles.  For this iteration, they would be running those races throughout the week, but the festival culminated in a Marathon on Sunday.

The timing was perfect in terms of tricking me into doing something really stupid.  You see, just a few days prior I had completed the last running route in Zwift, and I had therefore unlocked every running-related badge in Zwift (including the half marathon), with the exception of a marathon.  Prior to the event being announced, I just resigned to the fact that I would never get the marathon badge (technically, it's the "Going the Distance" badge), but that email came in and the seed of possibility was planted.

I wasn't committed to doing the event.  I wanted to get the kit you get as a reward for participating so signed up for a one mile race, whi…
Read more 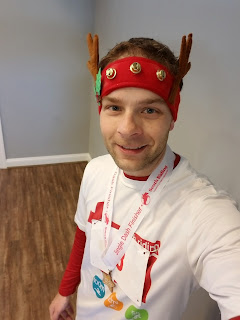 You know the saying "she won by a mile"?  Well, for my last race, I literally won by a mile.  Actually, I did the math and it was more like 1.3 miles

This is my local community's 5k/10k race.  The 10k course is two laps of the 5k course.  The turnout is pretty small - about 120 people for the 5k and 15 people for the 10k.  It's not what I would call a competitive race, but it is a really fun event with some nice people involved.

I've been running this race since 2013 and I've won the 10k 5 of the last 7 years, currently on a 4-year winning streak.  Unfortunately, the field has been dwindling each year.  From 68 people doing the 10k in 2013 to only 15 this year.  It's really sad to see, and I'm afraid that they are going to discontinue either the entire race or at the very least, the 10k.  I look at the race as a time trial because the victory feels a bit hollow.  In fact, I was the first person to cross the finish line on my first 5k lap - I beat the …
Read more