Well, That's Over With 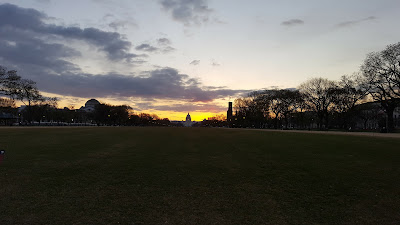 On Saturday March 11, 2017, I woke up at 4:30am, 15 minutes before my alarm was set to go off.  I already had my clothes for the Rock 'n Roll DC Marathon picked out and The Girl was spending the night at my in-laws' house and I knew exactly what I was going to eat for breakfast.  My top priority at that point was getting some coffee in me as quickly as possible so that I could, uhm, clear any blockages that may have hindered me during the race.  I didn't exactly leave myself much time as I was planning on departing at 5:30am.

I made my coffee and ate my breakfast.  I woke up The Wife and she ate her breakfast and before I knew it, we were in the car and on our way to downtown DC.  The car ride was only about 35 minutes - amazing the difference in commute times at 5:30 on a weekend vs any other time, ever.  I had my GPS taking us directly to the drop off and we got there without issue.  The drop off was about a third of a mile from the start line, but I got there with about 45 minutes to spare.  The only thing I had to worry about was keeping myself warm enough until the race start in the 20°F weather.  Having thought ahead about the cold temperatures, I was wearing some throw away clothes to keep me warm. 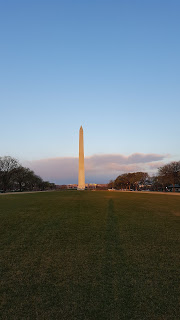 I walked around, exploring and getting a lay of the land, used the restrooms a couple more times, did some light jogging, and with 15 minutes until the start of the race, I ate my first GU.  I had an entire race nutrition plan mapped out.  I brought seven GUs and I was planning on taking one every five miles, plus the one before the race.  In terms of calorie replacement, that would be on the low end of replenishing my glycogen stores, but I was afraid that my stomach would be upset if I ate too many more.  Also, since I had never bonked during training, I didn't really think it would be an issue for me.

With a few minutes to go before the race started, I tossed my extra clothes.  I was still wearing tights, shorts, a compression shirt, a technical t-shirt, a running jacket, gloves, and a headband.  I was immediately cold, but that wasn't bad as once I got going I knew I would be at the right temperature.  Once stripped down, I started the Live Track feature on my Garmin 920XT.  I had the link sent to my wife, mom, sister, and parents-in-law.

I was very confused when it came to pacing this race.  I trained with the goal of breaking three hours (i.e., 6:52/mile).  However, I knew I wasn't going to be able to hit that based on the last couple weeks of training.  Then I got a cold a few days before the race and I wasn't sure if I would have a cold on the day of the race.  I thought I would try to go out easier and then negative split the race, so I set a workout on my 920XT, the first half of the race would be at 7:10, and the second half at 7:00.  And depending on how I felt I could adjust as necessary.

I even felt great going up the huge hill between miles six and seven.  I slowed down to 7:22 for that mile and my heart rate climbed right up to my aerobic max, but it didn't phase me and I was able to recover on the fly after that as my heart rate dropped back down to the low 150s and my pace increased back to the low 7:00s.

In fact, I was doing so well, that I set a PR for the half by about six minutes.  When I hit mile 14, there was a big downhill that was going right into the wind and that was the first time I felt like something wasn't quite right.  The wind and cold were really affecting me and my legs started to feel a little stiff.  When I got to mile 16, the workout on my watch had switched to a faster pace, and I couldn't even keep up with the slower pace from the first half of the workout.

I wouldn't say that I hit the wall until mile 20, but miles 16 through 20 were no cake walk.  If you look at my pace and heart rate, you can actually see the moment when I hit the wall.  My heart rate climbs above my aerobic threshold as my pace starts to slowly decrease.  Then all of the sudden, my heart rate plummets and my pace along with it.  I literally didn't have the glycogen in my legs to make my legs work any more than they were.  And to add insult to injury, the back half of the course was barren and boring.  No sights to see and not many people cheering you on.  As a result of depleting my glycogen stores and slowing down, my body couldn't keep warm.  I couldn't use my hands to open my GUs anymore and I felt the bitter cold with every step.

Then came mile 23.  I entered a park that seemed vaguely familiar.  I hoped that it was not the park that I was thinking of, which was part of a 5K course I had done last year and had a huge never ending hill on it.  Well, of course, it turns out I was remembering it correctly.  I passed a few people that were walking, but mostly I was getting passed.  This stupid race couldn't be over soon enough. 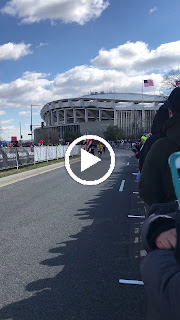 As I made it through the final chute, I was a bit disoriented.  I was so cold and tired I couldn't see straight, but I knew I needed to do something to get some calories in me and warm myself up.  I saw people walking around with thermal blankets but couldn't find where they were getting them from.  Eventually I found them and immediately wrapped one around my shoulders.  It helped keep the biting wind off of my back and some of my heat in.  I then grabbed a banana and a granola bar and looked for a place to sit down to try to open up my treats, knowing full well that my hands were too numb to do any opening on the fly.

I found a place out of the wind and got my phone out and called The Wife to let her know where I was.  She found me and opened my granola bar for me and gave me her jacket.  By that point I was shivering uncontrollably.  I did not partake in any of the post-race activities.  We made a beeline directly for the car, which was easier said than done.  I was walking pretty slowly and had some trouble navigating the flight of stairs we had to descend to get to the parking lot.

Once in the car, I changed out of my race clothes and into a fresh outfit.  I immediately felt better, which is great, because due to the road closures it took us 45 minutes to get out of the city and another 35 minutes after that to get home.

By far the highlight of the day was the waffles that The Wife made for me.  For some reason I was craving some waffles and she made some delicious ones with nuts and fresh fruit and whipped cream.

I would definitely run another marathon to get some more of those waffles.  Though, next time I'll re-examine my training plan and make sure that I run a race without bonking like I did.